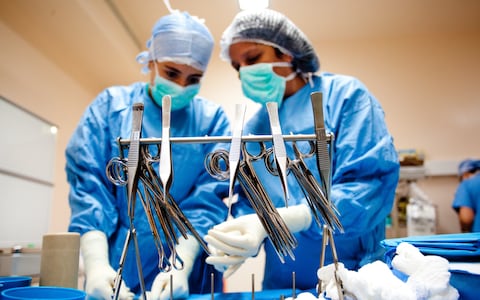 A “Japanese fungus” which is resistant to drugs has spread to at least 55 hospitals across the UK, public health officials have warned.

NHS trusts have been ordered to carry out deep cleans of all affected areas after more than 200 patients were found to be infected or carrying the potentially fatal pathogen.

Infection experts are alarmed by the spread of the fungus, which has been likened to a “superbug”- because it has already proved resistant to the main three classes of drug treatment.

The fungus, called Candida auris, was first identified in Japan in 2009, in the ear canal of a 70-year-old woman. Since then it has spread rapidy around the globe, emerging in at least five continents, with the first UK case detected in 2013.

Healthy patients can usually fend off the fungus, though they may carry it. It is those with compromised immune systems who are most likely to contract a bloodstream infection, which can prove fatal, or cause major disabilities such as hearing loss.

New guidance from Public Health England (PHE) warns that as of last month, 20 separate NHS trusts and independent hospitals have detected more than 200 cases of patients colonised or infected with C.auris.

In addition, more than 35 other hospitals have had patients found to be colonised with the fungus  transferred to them.

The three largest outbreaks “have proved difficult to control, despite intensive infection prevention and control measures,” the guidance warns.

The Royal Brompton Hospital and Harefield NHS Foundation trust in London has been the worst affected, with the first and largest outbreak in Europe.

The infections led to the closure of its intensive care unit for two weeks last summer, more than a year after the start of an outbreak which went on to affect 50 patients.

Global studies have found six in ten of those infected with the fungus die – though it has not been shown whether the infection has caused the deaths.

Officials said that so far, surveillance efforts in the worst-affected NHS trusts have not established any deaths as a result of the infection. The PHE guidance says the hospitals with signficant outbreaks have not shown an attributable rise in death rates. But the guidance also says it is “important to note” that these exercises did not provide comparable data on their normal mortality rates.

Hospitals and nursing homes have now been ordered to isolate any affected patients, and to carry out deep cleans of infected areas.

“Our enhanced surveillance of this uncommon fungus shows that in the UK it has mostly been detected in colonised patients, with a quarter being clinical infections.”

The hospitals with the most cases of the fungus had not found it to be the cause of any deaths, he said.

“Control measures include screening patients for the fungus, isolating anyone affected, focusing on the importance of hand hygiene and deep cleaning all affected areas.

“If a member of the public comes into contact with a patient who is carrying, or is infected with Candida auris, they should be protected by regular hand washing as a precautionary measure,” he said.

“This situation is a nightmare for intensive care units in particular,” he said. “The kind of patient that gets infected by this will normally already be immunosuppressed – whether that is because of chemotherapy, tumours, or deliberately suppressed for medical reasons,” he said. “On top of this, the drugs to treat this are heavily toxic, and the drug resistance means that all doctors can do is keep trying.” Meanwhile the invasive procedures in use in critical care settings – such as intubation – add to infection risks, he added.

Candida auris is a yeast species first isolated from the external ear canal of a patient in Japan in 2009. Since then C. auris has been associated with bloodstream infections, wound and ear infections in several countries globally. It has caused prolonged hospital outbreaks in India, Pakistan, Venezuela and Colombia.

How is Candida auris transmitted?

The fungus is usually picked up from surfaces or from skin.

The precise mode of transmission within the healthcare environment is not known. However, experience during previous outbreaks suggests that C. auris might substantially contaminate the environment of rooms of colonised or infected patients.

Transmission directly from fomites (such as blood pressure cuffs, stethoscopes and other equipment in contact with the patient) is a particular risk, however this does not preclude transmission via hands of healthcare workers.

What are the symptoms?

Candida auris has been reported to cause bloodstream infections, wound infections, and otitis (inflammation of the ear).

Candida is in itself a normal fungus which can be found in various places in the body, most notably as thrush.

Can it be treated?

The fungus has shown resistance to three of the main classes of anti-fungal drugs, and side-effects of treatment are common. It is very difficult to treat, not least because the treatment is so heavily toxic, and the patients who have been infected are already so ill. However, several patients have been treated successfully with appropriate drugs.